If you’re looking for some urban photography tips, who better to approach than one of Britain’s top 10 street photographers?

Ronya Galka received this accolade from the Interactive Design Institute and was also nominated for Best Photographer at the Sony World Photography Awards. On top of this, her photography has been exhibited at the Pall Mall Gallery in London.

It’s safe to say that Ronya has encountered her fair share of places and people through the years. So, what has she learned from her experiences?

Ronya, who lives in London, gives us her top urban photography tips.

How do you go about identifying a photo opportunity?

It’s all about being receptive to whatever and whoever comes your way. This is the beauty of urban photography compared to other art forms, it’s often more spontaneous. It’s not so much about pre-planning, it’s more a case of putting yourself out there and walking in the street.

If you wander around with an empty mind and pay attention to what’s around you, the opportunities will come. You’ll encounter different people, types of light and weather conditions, all of which are the ingredients of a great photograph. 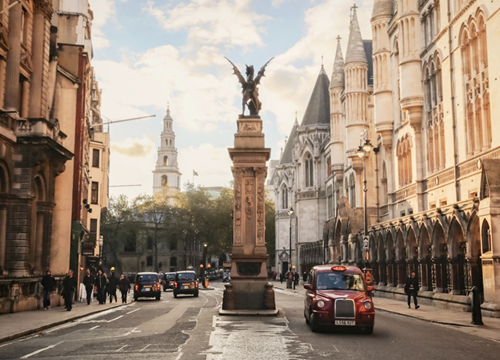 For me, finding the perfect photograph is a therapeutic exercise. You could look at urban photography as a sport – I can sometimes walk around 40,000 steps in one day. In this sense, it’s beneficial from both a physical and artistic perspective.

How impulsive and candid are your photographs?

I capture fleeting moments without any real interaction with the subject, aside from taking the photograph. I find that it’s not productive at all to decide what photograph I want to take. You don’t know what’s out there or what situations you’re going to encounter.

Having said that, if you’re relatively new to urban photography, it’s great to get an idea of what kind of shots typically work. Instagram is a great resource for this, as are books from a library.

But you mustn’t just take a photograph to get a lot of likes on social media. You need to feel the shot you take and feel connected to the subject you’ve captured. Igniting your passion is the most important thing. You’re not doing this by going to the same spot and capturing the same thing as someone else.

What’s the process for taking a picture of a person? Do you have to obtain permission from them?

We’re very lucky with the way the law works in the UK. If you’re in a public place, you can capture anything or anyone you see without needing to obtain permission.

However, this only applies if you’re using the photograph as fine art or on an editorial basis. For example, if I was taking photographs for Starbucks and captured a particular person or group of people, I wouldn’t be covered by law unless I had a model or property release form.

The US is similar to the UK regarding photographs of people in a public place. However, Germany’s laws are much more stringent. Anybody with a recognisable face can sue you for publishing images of them. It’s the same in Japan and Qatar.

That’s why you need to research the laws of particular countries if you’re taking photographs abroad.

Are there certain details you like to capture in your photographs and would advise other photographers to look out for?

The contrast between light and shade is fascinating and I like to capture this wherever possible.

Emotion is another common theme within my photographs. Whatever subject my eye is drawn to, there are emotions attached to it. Within my photographs, you can see loss, love and loneliness – emotions that we all experience. The French call this émotions fortes, which translates as ‘strong emotions’.

Some of my best pieces of work have created a strong emotional connection. For me, it’s not just about taking a well-executed photograph. It’s about the emotions a photograph triggers within me when I look at it.

Another key point to make is that there are no right or wrong details to look for when taking a photograph. You and I could look down the same street and our eyes would be drawn to very things, based on our personalities and life experiences.

What I look for and what the next photographer look for won’t be the same. The most important thing is to find something that excites you and concentrate on bringing this out in your picture.

A lot of your photographs are published in black and white. Is this intentional?

It evokes those emotions I alluded to and strips out the distractions. For example, you could take a photograph of someone who had a certain expression on their face and was wearing a red coat. In this instance, our eyes would automatically be drawn to the colour. We wouldn’t necessarily pay attention to the other details of the image.

By converting photographs to black and white, you really help to increase the focus on the subject. That’s why I like to strip back some of my photographs, to lose the chaos we encounter in day-to-day life. A good example of this is the photograph I took of a lady on Brick Lane one weekend. 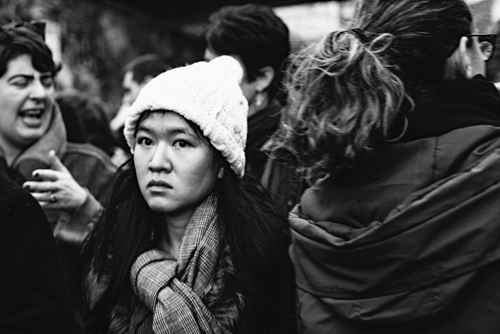 In this picture, you have the contrast of this woman appearing upset, while the person behind her laughs.

Anyone who’s been to Brick Lane Market knows how busy it can get and that’s captured here. In amongst this market of happy people, you have someone who doesn’t quite fit in. The black and white effect helped me home in on this detail.

Are there particular times of day you like to shoot? What advice have you got for other photographers on this?

The best piece of advice I can give is don’t wait for the perfect time. Don’t wait to have a whole day without work or wait until you go on holiday.

There isn’t such a thing as the perfect conditions for urban photography, so you should have your camera with you as often as possible. Use whatever time is available to you and pay attention to what’s around you.

Even if it’s just half an hour on your lunch break, this is an adequate amount of time to find an impactful image. It doesn’t matter if you live in London or a small town.Start with the day-to-day elements of life, like your commute to and from work, and you’ll be surprised by what you find. Over time, you’ll develop an instinct for where the shots are.

Which features lend themselves best to urban photography, from your experience?

Seek out places where there’s still some external light, such as markets. Don’t think it’s only in places like The Big Smoke where amazing art awaits.

Any place where people spend time outside lends itself to urban photography. Some of the best examples are photographs of kids playing in the street or people chatting while out and about.

The most important thing is to find somewhere where there is a good footfall. By doing this, you’ll have a wealth of subjects to choose from and explore.

Are there any themes you particularly enjoy exploring within your photography?

The overarching theme of my photographs is common humanity and how we can relate to one another, regardless of sex, colour or religion. You see that we all have the same ambitions and motivations in life, to a certain extent.

The unexpected is another central theme within my photography. There are unforeseen quirks in everyone and you can find humour in all sorts of situations – even those that seem quite innocuous.

The more photographs you take, the more this comes out. You think you’re shooting one thing and then another thing you hadn’t accounted for comes into the picture. I think of it as being rewarded by the Gods of photography!

For example, I took a picture in Paris where there was a guy waiting at the lights who had an unusual look to him. 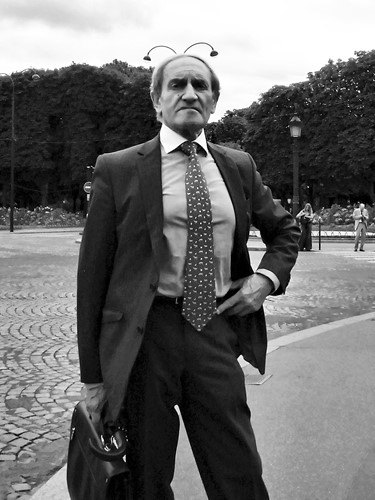 When I looked at the picture, there was a lamppost behind him when looks like a bug’s antennas. That’s why I called the picture A Bug’s Life, which is quite a fitting title.

Which aspects of urban photography do you find most personally rewarding?

The active element of urban photography is one of the most rewarding aspects. You can’t be a passive observer. You have to be in the moment and treasure it because in a split second, it’s gone.

Through being an urban photographer, you also get to experience so many things and meet so many people. You wouldn’t ordinarily connect with these people, but photography brings you together. It’s a passport to another life. I find this the most mind-blowing aspect of urban photography.

Which of your photographs are you most proud of and why?

The picture I tend to single out is It Must Be Monday Morning.

I took it 11 years ago, when I worked in marketing. At the time, I was experiencing a lot of change in my work and private life – I worked for the Royal Bank of Scotland Group in London during the recession and times were hard.

I bought a point and shoot camera which I took with me on my lunch breaks. I wasn’t really into photography at all, I just wanted to get away from everything and I fell in love with it out of nowhere.

It was when I was getting into photography that I shot It Must Be Monday Morning. This is basically a mirror image – a reflection on a wet payment of two guys walking in Holborn with their umbrellas. At the time, I really didn’t want to go into work and this came through in the photograph.

I submitted it to the Sony World Photography Awards and was nominated for Best Photographer. This was a huge honour given that I’d only picked up a camera about six months earlier.

It opened the doors to urban photography for me and I subsequently quit my day job and took up my passion.

What advice would you give to other photographers?

I would say to any aspiring urban photographer that they can do the same as me. Photography is the only art form where you don’t have to spend years practising and honing techniques – it’s democratically available to the masses.

If you were a painter or sculptor, you’d have to dedicate years to your art form, but in photography everybody is an amateur when they start out. That’s the beauty of it. You can go a long way in a short space of time with a bit of creativity and dedication.

You can check out more of Ronya's work here: