Priceless jewellery is meant to bedazzle and enchant. But imagine if your jewellery brought you nothing but bad luck? Here’s our list of the most famous cursed jewellery from around the world.

The diamond was given to Queen Victoria in 1850 as war compensation following the conquest of Punjab in 1849. The Indian-originated diamond, now a part of the British Crown Jewels, also holds a mysterious superstition whereby every royal male who has worn the stone has lost his throne. Ladies, you're safe! 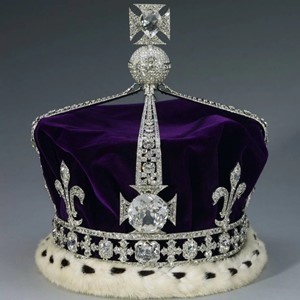 The Kohinoor diamond, set in the Maltese Cross at the front of the Queen Mother's crown. Image Credit: Royal Collection Tru

Many suspect this item of cursed jewellery (which isn't actually a sapphire) was part of the treasure trove stolen from the Temple of Indra in Cawnpore during the Indian Mutiny of 1857. It eventually found its way to a writer named Edward Heron-Allen, which is when the curse of the Delhi Purple began.

Heron-Allen started to notice he suffered from nothing but misfortune as soon as the gemstone was in his possession. So, he gave it away to one of his friends, who promptly returned it after being struck down with laryngitis - not ideal considering she was an opera singer.

It has even been claimed that Heron-Allen threw the Delhi Purple Sapphire into Regent's Canal, only to have it mysteriously returned a few months later! The jewel was eventually sealed up and sent away to the family banker to be locked away until Heron-Allen's death. Only three years after his death were they allowed to donate the stone to a museum. 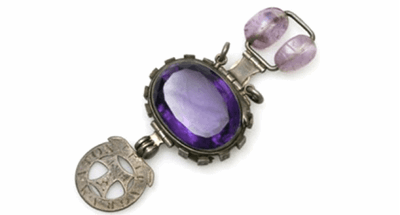 It has been claimed the Delhi Purple caused an opera singer to lose her voice. Image credit: National Trust.

The Graves Supercomplication is a £15 million watch and is known as the most elaborate watch in the world. It was commissioned by American businessman Henry Graves in 1925, who asked watchmaker Patek Philippe to make him the world's most complicated watch.

One face shows the moon, another the New York sunset and sunrise times. It also has an alarm, a stopwatch and a perpetual calendar. However, as soon as Graves took possession of the stunning watch, his best friend passed away and scarcely a month later his son was suddenly killed in a car crash. The curse was born.

After Graves' death in 1953, the watch was passed down through various generations of the Graves family without incident. It was eventually sold at auction in 1999 to an anonymous buyer - later revealed to be a member of the Qatari Royal Family, named Sheikh Saud bin Muhammed Al Thani, who treasured the watch as part of his extensive art collection.

However, the curse of the watch soon struck again. In 2012 the High Court in London froze some of the Sheikh's assets in a legal dispute with auction houses over millions of pounds in unpaid invoices. Saud bin Muhammed was then believed to have given the watch to Sotheby's to sell at auction to help pay off his debts.

The curse had other ideas. 48 hours before the watch was sold at auction for 15 million, Sheikh Saud bin Muhammed Al Thani died unexpectedly, aged 48, at his London home... 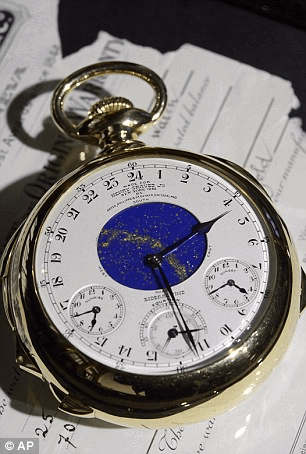 The timepiece was named after the American businessman who commissioned it. Image credit: Associated Press.

Also referred to as the 'Eye of Brahma Diamond', this piece of cursed jewellery was allegedly stolen from one of the eyes of a statue of the Hindu god Brahma Pondicherry. It is believed this disrespectful act was what caused the future owners of the Black Orlov to suffer violent deaths.

In 1932, J.W. Paris - responsible for bringing the diamond to the US in 1932 - jumped to his death from one of New York's tallest buildings. The next owners were two Russian princesses, Nadia Vyegin-Orlov and Leonila Galitsine-Bariatinsky, who both leapt to their deaths, in Rome, just months apart in 1947.

In an attempt to break the curse, the diamond was re-cut into three separate gems and has since been owned by a succession of private owners. The division must have worked because the curse of the Black Orlov diamond has not struck since. 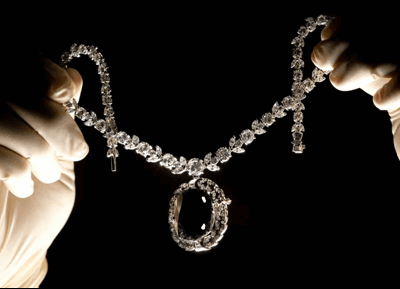 The curse of the Black Orlov has, thankfully, not struck since 1947. Image credit: London Museum of Natural History.

The Hope Diamond is one of the most famous pieces of jewellery in the world, with records of it being owned dating back almost four centuries. Unfortunately, its curse also brings misfortune and tragedy to persons who own or wear it.

To name just a few of the people who owned this diamond and what happened to them: Marie Antoinette and King Louis XVI (beheaded), Princess de Lamballe (beaten to death by a mob), Jacques Colet (suicide), Surbaya (stabbed to death by her royal lover) and Simon Montharides (died in a carriage crash with his entire family).

There's also the story of Mrs Evalyn McLean, who purchased the Hope Diamond from Cartier in 1911. McLean threw lavish 'Finding the Hope' parties where she would hide the gemstone somewhere in her estate and invite guests to look for it. Sadly, the curse struck her family too. McLean's son was killed in a car crash, her daughter died of an overdose, and her husband left her for another woman!

Thankfully, since the Smithsonian museum acquired the diamond in 1958, the curse appears to have disappeared. 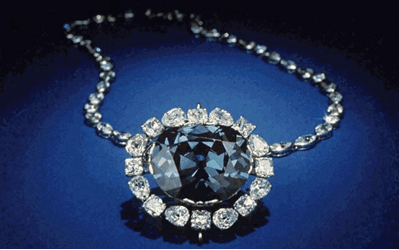 The curse of the Hope Diamond has claimed many victims. Image credit: Dane Penland